T.E. Lawrence, also known as Lawrence of Arabia, died in a motorcycle accident and was buried on May 21st 1935 in the cemetery annexe of St Nicholas Church, Moreton, just a few miles from his home at Clouds Hill in Dorset.

Although it might be expected that Lawrence should have been buried in Westminster Abbey, this quiet place in Dorset is not inappropriate given that Lawrence spent his last years hiding from the unwelcome fame of his wartime exploits. His funeral was attended by a multitude of soldiers, writers and statesmen, such as Sir Winston Churchill.

Follow the 7 mile walking trail starting at Bovington’s Tank Museum taking in Lawrence’s home at Clouds Hill and his last resting place: the cemetery at Moreton. 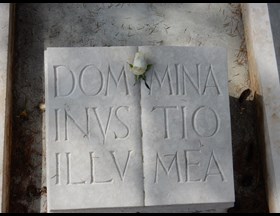